Not all news is necessarily good news, which is why the two-factor theory helps recognise the triggers of positive and negative publicity

Poor publicity is rarely the flipside of good publicity.

Whilst a few issues possess ‘publicity symmetry’ such as financial performance, poor publicity is mostly driven by a different set of factors to good publicity. This is a similar phenomenon to the two-factor theory that Frederick Herzberg discovered in relation to employee motivation.

(Photo by Jeremy Bishop on Unsplash)

Why is it important to realise the different triggers of positive and negative publicity? Just as Herzberg taught managers the importance of dealing with grievances but also that removing these grievances could not itself produce motivation, so in respect of publicity the removal of problems and the generation of opportunities are two discreet activities.

The role of ethics

The diagrams below show the triggers of good and bad publicity. 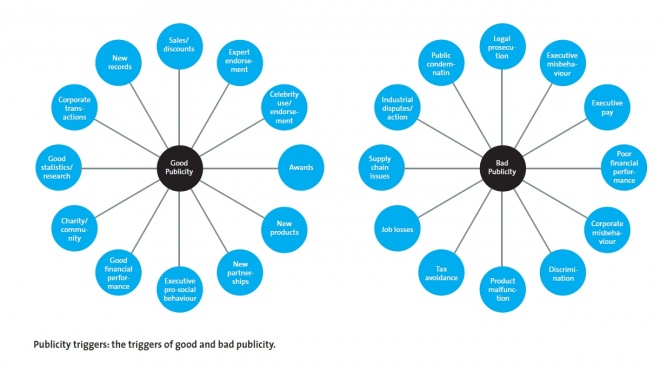 The theme that connects most of the corporate crises in the second diagram is that most involve a failure of ethics. Ethics is an excellent example of the two factor theory because whilst poor performance will be quickly forgotten when performance improves, breaches of ethics really linger in the public memory. Ethics has a strong negative bias; good ethics is (sadly) not newsworthy, both because of the high level of cynicism about organisations and because good ethics are expected and therefore not regarded as praiseworthy. Signs of bad ethics are highly newsworthy, however, and highly  corrosive of reputation.

In 2013 the UK’s Co-operative Bank provided a classic example of the negative bias that ethical matters exhibits. The Co-operative Bank was founded in 1872 in Manchester. In 1992 it introduced an ethical policy. From 1992 onwards, the bank started promoting itself as ethical, using ethics as a theme in much of its advertising:

In 2013 the bank went further and incorporated its ethical policy into its constitution. Almost immediately after this, the ethical policy began to unravel. In March 2013 the Bank reported losses of £600 million. The CEO was dismissed and the new CEO, Euan Sutherland, then reported in May 2013 that the bank had a £1.5 billion “black hole” in its accounts. The chairman of the bank, Paul Flowers, resigned in June 2013 and in November 2013 he was filmed buying drugs shortly after giving evidence to a parliamentary committee about his time as chairman.

A number of other misdemeanours that Paul Flowers had committed in the past then surfaced and the publicity became so intense that the British prime minister, David Cameron, announced that there would be an official inquiry into how Paul Flowers had obtained his position as Co-operative Bank chairman.

The dogged pursuit by journalists of the Co-operative Bank’s ethical failings and the intensity of the negative publicity that the bank attracted was in large part attributable to the long advertising campaign that the bank had run claiming that it was highly ethical. By proclaiming itself as pure, the Bank painted a target on its back and ensured that it would be scrutinised closely and criticised heavily for any breaches of law or ethics.

The personal troubles of Paul Flowers became an emblem of the dysfunctional governance of the bank. What the bank failed to understand is that whilst high standards of conduct are important for organisations and individuals, actively promoting yourself as highly ethical is a strategy that can only lead to scepticism and tragedy. The bank failed to perceive that ethics is a “hygiene” factor; it is only newsworthy when defective.

How can organisations protect themselves against negative publicity and secure more positive publicity? Since most good and bad publicity arises from within the organisation, rather than externally, managers should be trained to identify publicity risks and opportunities and to flag these to the communication manager as soon as they are spotted.

For instance, customer service managers can be trained to identify service issues which have real potential to cause negative publicity. It usually takes many weeks (sometimes many months) for issues to make their way from the originating department to the newspapers. A trusted whistleblowing process is also a valuable part of this early warning system, because the line management system is imperfect and will sometimes block an issue being escalated.

Similarly, for positive publicity, line managers are an excellent source of ideas. Expert knowledge of products and customers is vested in the line managers of an organisation, and tapping in to this expertise is an excellent way of generating publicity ideas. Naturally, communications departments have to be sensitive in the way they communicate with employees, in order not to tread on the toes of line managers, but accessing the ideas and knowledge of all employees is such a valuable practice that the results will soon repay the effort involved in rolling the practice out.

Encouraging employees to convey potential publicity risks and opportunities through training employees in the two factor and two biases theories may produce a major improvement in organisational communication and crisis mitigation. The reputational benefits of years of careful use of public relations opportunities can be wiped out by a single bad incident.

Therefore, what is especially important for the preservation of reputation is that managers should be taught to see organisational behaviour through the eyes of journalists , and to regard the acquisition of bad news as equally important as the acquisition of good news. Through this attitudinal change, senior managers may discover unpleasant truths about their own organisations before their competitors, critics and regulators.

Daniel Valentine is a consultant with Portman PR specialising in financial communication and corporate reputation, and a faculty member at Regent’s University London. He has spoken at conferences in Europe, the Middle East, Africa and Asia. Daniel served with the reserve forces in the Royal Corps of Signals, the combat arm that provides communications throughout the command system of the British Army. He is the author of Online Marketing to Investors: How to Develop Effective Investor Relations.